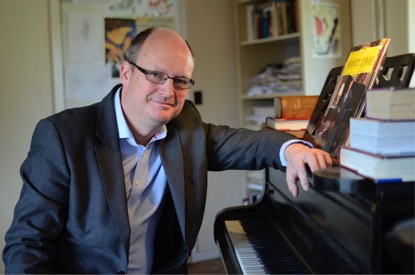 He graduated from the Royal Academy of Music in Aarhus and continued as aspirant at the Lithuanian Academy of Music 1992-1994 by Professor Veronika Vitaite. Several masterclasses by Lazar Berman, Eugen Indjic and Günter Ludwig.

Martin Lysholm Jepsen gave numerous concerts as soloist and accompanist, and in 2001 he founded the Gradus Piano School in Aarhus for young piano talents. At Gradus Martin educated some of the most promising danish pianists, preparing them for further professional studies at aknowledged academies- in Berlin, Düsseldorf, Helsinki, Copenhagen, Vilnius and Lake Como.

The Gradus students appeared succesfully in many concerts as soloists and with orhestras in Denmark and abroad. They won more than 100 topprizes in national and international competitions. Since the summer 2016 Martin Lysholm Jepsen has been appointed as teacher at the Royal Academy of Music in Aarhus and the Junior College same place. Martin Lysholm Jepsen gave masterclasses and lectures on the theme ”Basic technique” in several countries and he is in the jury of competitions in Poland, Lithuania and Denmark.

Martin Lysholm Jepsen is in board of EPTA-DK and he is the founder and artistic director of the Gradus International Piano Festival in Musikhuset Aarhus.