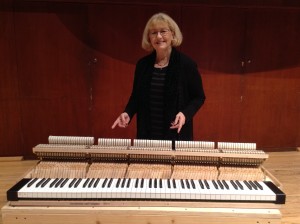 Erica Booker graduated from the NSW Conservatorium of Music in performing and teaching. Erica has been a performer, accompanist, piano and classroom music teacher, choral conductor and adjudicator. Since 1979 she has taught piano and lectured around the world following the Suzuki philosophy. A Suzuki Piano Teacher Trainer, she also pioneered Suzuki Early Childhood Education Music classes in Sydney. Erica’s studio has four pianos with different sized keyboards. She co-authored a paper with Rhonda Boyle for the 2011 APPCA Conference and presented at ASPAH symposiums in 2010 and 2014, and at 2014 World Piano Conference in Serbia.